Shown below is the output from a Spectrum 128+2 as displayed on a Japanese Sharp CZ-614D monitor. The pins required on the Spectrum side are:

Red, Green and Blue connect directly to the monitor, and a Ground connection is also necessary. The monitor cannot deal with the composite sync directly however, so an LM1881N was used.

The composite sync is connected to pin 2 of the LM1881, with the composite sync output from pin 1 then fed to the monitor's horizontal sync input (pin 14). Vertical sync is output on pin 3 of the LM1881, and this is similarly fed to the monitor's vertical sync input on pin 15. The LM1881 requires a power input of between 5V and 12V on pin 8 and it must also be grounded.

For a 128K Spectrum the Bright signal available on pin 3 is also required. This must be connected to three diodes which must then be combined with the Red, Green and Blue signals before connection to the monitor. See this website for more details. 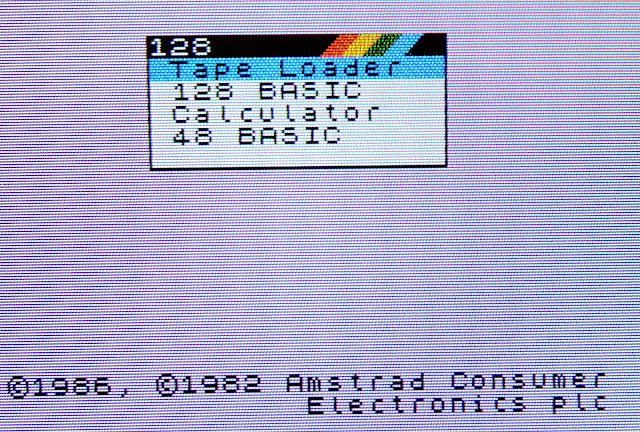 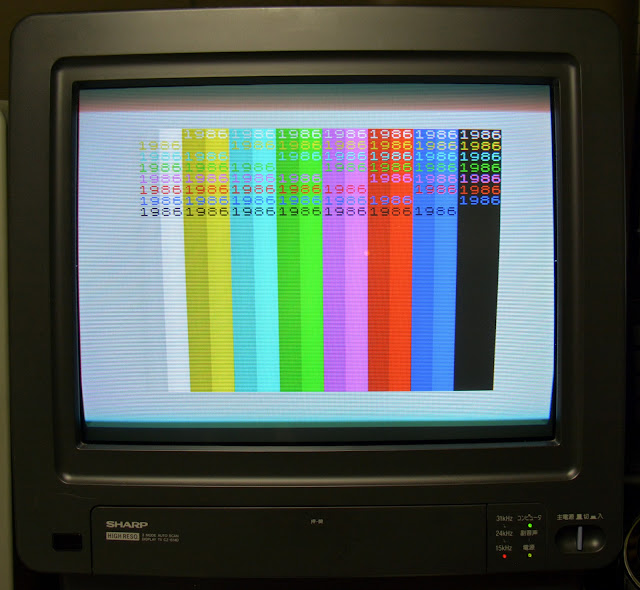 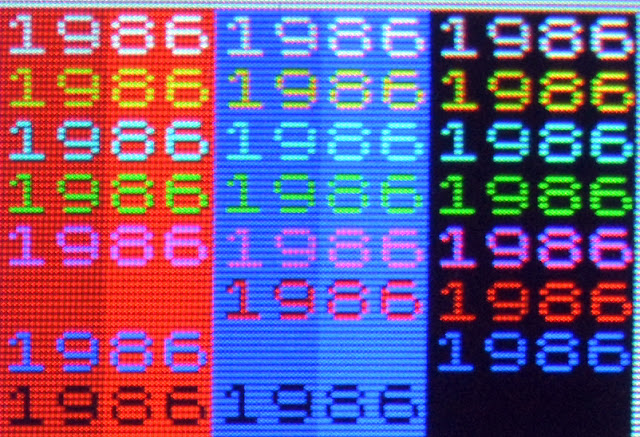 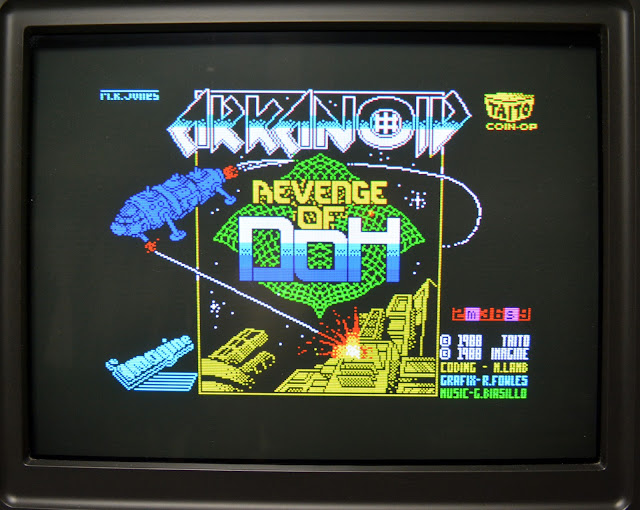 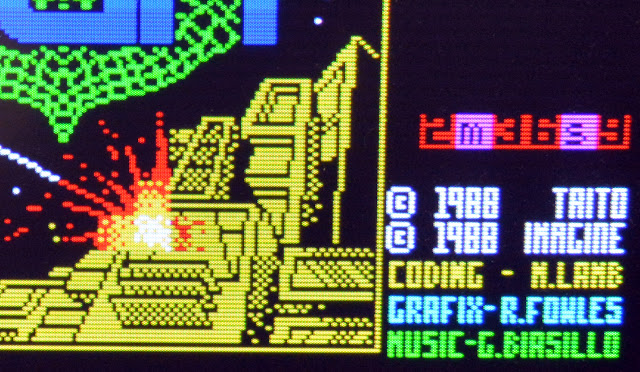 Posted by Magic Knight at 20:23 No comments:

Posted by Magic Knight at 15:34 No comments:


For those of you with machines with 2MB of RAM or more, holding down the Shift key while loading After Burner will load the entire game into memory.


Kyuukyoku Tiger can be controlled with the mouse. Hold down F2 while booting to enable it.


You can start on any level in R-Type. Select the level you want to play from the DEMO option, and then start the game while holding down the S, T, A, G and E keys.


Akumajou Dracula has an extra undocumented MIDI option. For GM, press XF1 and G together on the MIDI selection screen.


Arkanoid: Revenge of Doh has a 15KHz mode which is undocumented. Hold down the OPT1 key while booting to enable it.


Try setting the internal clock to between midnight and 1:00 AM and then boot up either Dragon Spirit or Garou Densetsu, check if you can see and hear anything unusual.


On the title screen of Marchen Maze, press Shift and HELP together to access the options screen, allowing you among other things to select the Arcade version. Bonus trick: Start the game with Disk B in Drive 0 and Disk A in drive 1 to activate PCM sound.


From the Pac-Mania title screen, press F5 to redefine the keys. Redefine them to X,6,8,0,0,0 and make sure to use the numeric keypad. Exit by pressing Esc and you'll automatically enter the hidden options screen. Bonus game: The original Pac-Man is included, run the pac.bat batch file in the PACMAN folder.


Super Hang On: Hold down the HELP key as soon as the game starts booting up, and the display will change to 31kHz.


Fantasy Zone includes the undocumented Fantasy Zone 3D - hold down the Shift, CTRL and HELP keys together when booting to activate it.

It can also be started from the command line, and there are some other hidden features in this game

So, let's have a look at command line options. First, boot the game in Drive 1 (not 0) and you'll be returned to a command prompt.

To activate the options, type "A：FZBOOT XX" where XX is one of the following options:
24 :- activates 24kHz mode
opaopa=n :- number of lives, range is between 1 and 5
rank=n :- difficulty level, range is 0-3
price=n :- price of an Opa Opa, range is 0-3
jpn :- use the Japanese soundtrack
arrange :- use the arranged soundtrack
3D :- enable Fantasy Zone 3D
continue :- enable continuing
save :- enable high score saving

So example commands would be "fzboot -24", "fzboot -rank=3" and so on. By the way, most of these can be changed in-game. 3D mode is an exception.

Similarly, following the same procedure as above, enter "A:FZMAIN debug" (instead of "A：FZBOOT XX")to start the game with a reduced display size. Looks bizarre. You can cycle through to normal mode with the [HELP] key.

To fast forward through the super play, hold down the CTRL key.

The method of accessing the Space Harrier level (Dragon Land) is well documented, so there is no need to mention it here.


Motos
On Christmas Eve and New Year's Day different opening music is played. Also, for an arranged soundtrack, instead of loading the game from drive 0, load it from drive 1. If you turn on the 「ひらがな」「全角」「INS」「CAPS」「コード入力」「ローマ字」「かな」 keys within the config screen, you can select a special SARU mode, which is easier than the EASY mode.


Bosconian
To advance to the next stage, press the Q, E, T and U keys together while playing the game. If you turn the code key on, you'll hear an echo of the sampled voice.


Full Throttle
There's a debug mode present within Full Throttle, but enabling it isn't straightforward. First you have to create a text file on disk A called FTH.DBG, and within that file enter the desired attributes. Here are the parameters:
Pass Word = 大西結花
Debug Mode = OFF/ON
Display Mode = High
Nitro Stock = 3
Timer Count = 070
BGM Test = OFF
Sound Test = OFF
No Hit = OFF
Continue = 0
Select = OFF
Level = 5
Sound Type = 0

Turning on Debug Mode allows you to see how much memory is being used when the game is loading.

If the Display Mode is set to High, the frequency is 31KHz, Low gives 15KHz

Nitro stock has a range from 0 to 9

BGM Test and Sound Test, when turned on, allow you to run their test modes - press ESC during the game and then the 1-8 and A-S keys to try them out

Turning No Hit on makes you invincible

Continue allows you to continue the game, the number of continues can be set from 0 to 9

Sound Type
Four versions of the music can be chosen, the range is 0 to 3.


The Fairyland Story
To see the staff credits, turn Continue off on the options screen, start a game and when the Game Over message appears, press the A and B buttons on your joystick at the same time.


Phalanx
Phalanx includes a hidden stage. Crash into what looks like a red window and you'll be warped through.

On the configuration screen, the following commands can be entered for their respective effects:
AKICHANSUKI     Stage Select
SUGOINO     Invincibility
FUERUNO     Increase your number of lives

For these to work, you have to hold down the first key, and then the second together, then take your finger off the first key and press the third and so on. So for the first cheat you'd hold A and K, then K and I, then I and C and so on.


Parodius
There's a sound driver test mode on Disk A. Run SD_DRV.X from the command line. As the program tells you, pressing Space progresses to the next piece and ESC will end the program.


Detana!! Twinbee
This has a music mode like Parodius. Run SD_DRV.BAT from the command line.

Pressing [ESC] in-game and then F3 enables a pseudo-vertical mode.

If you have more than 2MB of memory, hold down [HELP] while booting to load the entire game into memory.


Baraduke
On the high score table, enter your name as JUNKO, KISSY or TAKKY and observe the result.


The NewZealand Story
To activate Debug Mode, hold down the [UNDO] key while booting. While playing the game, try out the following "features" using the keys indicated:

F1: change your weapon (cycles through them)
F2: control the balloon you're riding on
F3: increase the speed of your jumps
F4: become invincible
F5: freezes the enemies
F6: kills all enemies on screen
F7: sends you to the end of the round
F8: makes enemies riding on balloons fall off
ESC: pauses the game, you can then use the left/right controls to select the round


Chuka Taisen
Another debug mode. Hold down the 記号 key while booting, and during the game use these keys for the given effects.
F6: kill all enemies
F7: change your speed
F8: change the level
F9: change the magic power you currently have
F10: turn invincibilty on/off
[UNDO]: end the current stage


Gemini Wing
Infinite continues: on the title screen, hold down the G, E, M, I, N keys at the same time and you'll be told you have 9 continues. In reality, they should be infinite.

Gemini Wing also has a vertical mode, hold down F7 while the game is booting. Unfortunately it doesn't allow you to rotate the monitor.
Posted by Magic Knight at 16:01 No comments:

These games ran better at 16MHz.
With some, like Populous etc. it's hard to tell if they're much better overall, but generally the graphics move slightly faster.